Hi, welcome to ACR Concrete & Asphalt ADA Compliance Construction. We specialize in bringing properties into full compliance. My name is Anthony Guichard, I’m the principal and founder of ACR Design and Build. And today we have one of our team members, Jason, who is our CASp inspector. Again, Jason’s been doing this for a number of years. His number’s down in the 400s. Also Jason is a DSA inspector, he’s out in the field, inspecting contractors work on a daily basis. So he’s current, he understands forming, the whole process of building a ramp, the railings. So that gives him an additional element of education, which makes him part of our team, a very well sought after principal. So what we’re going to do today is briefly talk about ACR’s definition of the team spirit. If you are caught up in an ADA lawsuit, you are going to need three individuals, actually four, I happen to wear two of the hats.

So you’re going to need a quality CASp report. So keep in mind CASp reports… I’ve seen them down at $75, they’re a very inferior product. A CASp report performed by a quality individual, such as Jason, again on a strip center, four units liquor store, nail salon, donut, coin operated laundromat, anywhere from four to $600. That is a quality report, when you start getting down to less than that… and I’ll tell you, I look at a lot of them on a daily basis, and I have to locate the CASp inspector, and he may be out of town, getting back to me three, four days later. The nice thing about having a team, Jason and I talk on a daily basis. Now, in addition to Jason… and keep in mind, let me elaborate or add one more item, Jason is not an employee of ACR. He’s a separate entity, which is important for conflict.

A lot of contractors are becoming CASp inspectors, and they’re inspecting their own work and telling you, “That’s okay”. That’s considered a conflict. Your inspector should always be separate. So that’s why Jason is separate. In addition to that, we have an expert ADA attorney. She, again, is not an employee of ACR, which means we’re eliminating that conflict. So we come together for our clients, for instance, you’re filed in a lawsuit, you send that lawsuit over to us. We immediately get that CASp report out there, oftentimes Jason can get out there anywhere from 24 hours to 72 hours, depending on how critical it is and get that CASp report. That CASp report comes back to me, I review the CASp report, I review the lawsuit, I send all the information to our attorney. The attorney looks at it, I tell her that allegation 1, 2, and 3 is a bunch of baloney.

According to the CASp report, she takes that fire power. She comes back to the plaintiff and says, “Hey, you know, allegation 1, 2, and 3 are ridiculous. You need to remove those. And if you’re attaching $4,000 for a statutory amount for those corrections, that needs to go away because here’s our CASp report. Our CASp report says your allegations are not correct.” So we’re going to stand firm on that. So what happens is we may come back and say, “Okay, well, we got caught on allegation 5, 6, and 7.” So that’s where our attorney’s going to negotiate to get that settlement, that initial settlement from 25 K, try to get that down. Sometimes at 5 K. It’s very, very unusual that if you’re caught up in the lawsuit, that you’re going to get out of it without some type of a settlement, but your best chance is having a full team go through exactly what I illustrated.

If you don’t, if you hire your CASp inspector separately, if I have questions and I’m going to work, I can’t get ahold of them. I may not find them for a week. You have 21 days in federal court if this is filed, you’ve got 21 days to start responding. So time is of the essence. You’ve got to really get on the ball here. So don’t wait until the last minute. It can become very costly. So one touch phone call with ACR, we get that CASp report, I look at the design, I’m putting together my list for the legal counsel to defend you with all the firepower that she needs. In the meantime, I’m tweaking the design, I’m putting together a cost for the corrections. You have all that information coming to you at one phone call.

If not, it’s going to be frustrating. Your attorney isn’t working with your CASp, neither of them are working with a good designer. They may work with a contractor, and a contractor doesn’t have all the experience necessary. So that’s part of our ADA team and our four step process. CASp inspection, design, construction, and re-inspection. If you want to add another element, formal plans and permitting, then we offer that as well. So those are kind of our four steps. Is there something in there that I’m missing or that you may want to touch on that our potential clients could catch up on?

There is one thing. If you go with the team, if you go with ACR and go with me, there’s collaboration that happens. Every CASp report that’s handed to a contractor isn’t black and white. It can’t all be done without anyone thinking, they just go in and do the work. Oftentimes there’s collaboration. If you have a separate CASp inspector and your contractor needs to talk to him, the CASp inspector’s charging by the hour, he’s looking for someone to bill to, it’s either you the client, or the contractor. There’s no charge for collaboration, Tony and I work together all the time. We collaborate on jobs all the time without the client ever even hearing or knowing about it.

Okay. So I think through the years that we’ve been doing this, I don’t believe anyone else has put together the expert panel that we have, that we call the ACR ADA team. And it’ll take all the frustration out of it, it’ll save time and it will save money. The most important part is it keeps you out of future lawsuits if you follow our guidelines. But thanks for joining us, and again, stay tuned for further educational debunking of myths

ADA Compliance – We’re grandfathered in or are you 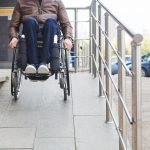 What Are The ADA Ramp Requirements I Need To Know